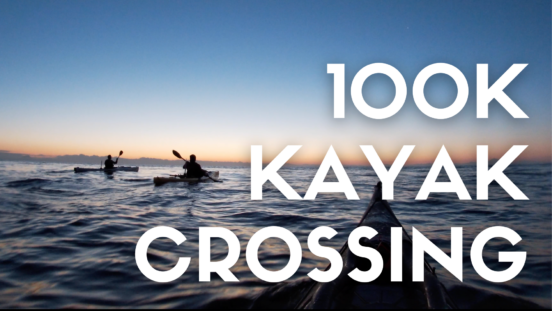 Paddle Canada instructor John Lippert, along with two others embarked on a 100km paddle across the Strait of Georgia as a fundraising challenge. Here is his story:

I don’t know much about human trafficking… but I do know how to paddle.

It all started with a timely email. I was heading back home to Vancouver from a kayaking trip at Surge Narrows when I received the Summer Century Campaign email. The challenge: go 100k in two months’ time and raise money for Ratanak International, an organization that helps prevent and free people from human trafficking in Cambodia. Half-joking, I turned to my friend, Lauren, and asked her if she would be up for crossing the Strait of Georgia by kayak for the fundraiser. Without hesitation, she said, “Sure!” And with that, our journey began.

Having heard of kayakers crossing the Strait of Georgia, we knew it was at least possible. I don’t think I had ever paddled more than about 20 kilometers non-stop, but with a history in military special operations, I hoped to be able to push through the mental challenge. We also got our good friend Jess, another Paddle Canada Instructor, to join us for the crossing. And we somehow convinced him that we could do it in one go!

Having heard of Ratanak, I did not know much other than they worked in Cambodia to help free people from human trafficking. As I began to research the details of the crossing, I also began the journey of learning about Ratanak as an organization. The more I learned, the more I was impressed by their approach! They intently listened to the story of Cambodia’s history; filled with violence and oppression from internal and external powers. They paid attention to the root causes of human trafficking so they could understand what needed to be done to prevent and free people from being trafficked. And they approached humbly, recognizing that for the programs to be successful they would need to be led by Cambodians who understood so much more than an outsider ever could.

Like I stated at the beginning, I don’t know much about human trafficking and even less about what I could do to prevent it. My life here in Canada is quite stable and I have much to be thankful for. The more I learned about Ratanak’s work the more excited I became at the thought of using my knowledge, tools, and gifts as a kayaker to help people from being trafficked.

On the evening of July 24th, the three of us set out from Swartz Bay on Vancouver Island and paddled a solid 22 hours and 5 minutes to the Jericho Beach Kayak Centre. At the end of the grueling crossing, we were greeted by friends, family, and fellow kayakers who had been supporting us in donations, in spirit, and in other tangible ways. It was abundantly evident that Lauren and Jess and I were not alone on the crossing. We had a community of people backing us, believing in us, and encouraging us along the way. I truly believe we are stronger when we stand together with others to make this world a better place, and I hope that we as the kayaking community in Canada can stand together with others around the globe to make this world a better place.

To donate to the 100k Kayak Crossing, please click here

To watch a video documenting the crossing, please click here