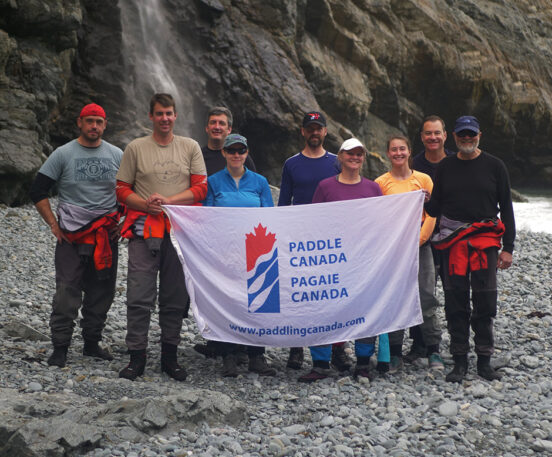 This award was created in honour of Kirk Wipper, who was a member of Paddle Canada from 1975 until his passing in 2011. He served many different roles within Paddle Canada over his tenure, not to mention his many contribution and affiliations within the canoeing community outside of Paddle Canada.

The recipient of this award is selected by the Board of Directors in recognition of outstanding contribution to Paddle Canada in canoeing, kayaking, paddleboarding, or through demonstration of passion and commitment to our mission statement.

Nominations for the Kirk Wipper Award may come from any Paddle Canada member. (form at the bottom of this page)

Tony Palmer has been volunteering for Paddle Canada for over 25 years since he joined the Paddle Canada Board as the Alberta Director in 1994, since then he has volunteered in a number of different positions. He has served on our program committees, and most recently was the Chair of the Program Coordination Committee, and was part of the team that developed both our Stand-Up Paddle and Camping programs. He was a lng time contributor to Kanawa, our print magazine. He has been an invaluable source of historical and how-to information when we went through recent staffing changes. Tony is passionate about paddling and Paddle Canada and devotes a large amount of his personal time an energy not just to paddling, and teaching but also ensuring that Paddle Canada keeps moving forward in a positive direction. Kirk Wipper was known to advocate for the paddling community to “pull together” and we believe that Tony shares this same sentiment!

Charles has been a long-time instructor with Paddle Canada. As a major driving force and creator for the Style Canoe Program, he continues to look, work at and offer insight into the Style program as it is today. He continues to grow by developing his skills by venturing into the Poling stream and eventually becoming an instructor to spread this discipline. He is also pretty handy at videography and has developed a video series for both style and solo canoe paddling maneuvers. Charles holds multiple certifications including Advanced Instructor Trainer in Lake (Solo and Tandem) and Style, and an Instructor in Poling. Off the water, he sits on the Bill Mason Scholarship Committee, and has, on occasion encouraged his students to donate to the fund in lieu of his instructor fees. We are very pleased to be adding Charles’ name to Kirk Wipper Award.

Brian’s contributions to Paddle Canada date back to the 80’s, and he became more heavily involved in 2007. His contributions include but are not limited to volunteering on the membership, hiring, strategic plan committees, he served a number of terms on the Board of Directors as the Manitoba Director, and as Vice-President. He has been (and still is!) an active member of the Canoe Program Committee, contributing to an overhaul of the program as well as years as the manual editor. His years of both volunteering, and actively instructing canoeing make him an ideal recipient of the Kirk Wipper Award.

David is being recognized for over 20 years of contributions to Paddle Canada. What started as a staff position as a Program Coordinator from 1998-to 2004, he later returned as a member of the Sea Kayak Development Committee and held the position of chair for 7 years. He was one of the members who created the Program Coordination Committee and was instrumental behind the re-write of the Sea Kayak program and the development of our new Camping Program. His work on committees and combined work on both our public and members’ website make him a very worthy candidate of the Kirk Wipper Award.

The first recipients of this award were announced at the 2016 Paddle Canada AGM. This is an award to recognize outstanding work done by a volunteer of Paddle Canada.

2021 Rick Wise, for his contributions to the Membership and Sea Kayak Program Committee

Want to nominate a volunteer?