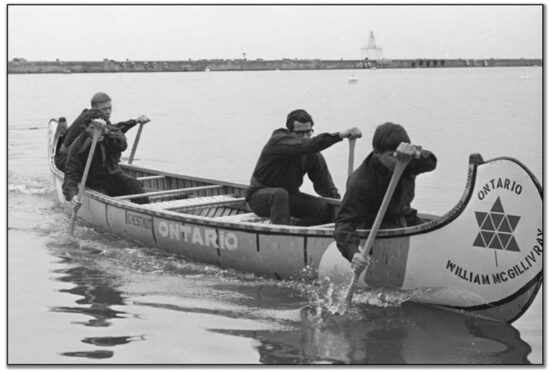 One of our founders, John Eberhard found himself frustrated when researching a dream paddling trip in northern Saskatchewan. Despite many letters sent looking for information regarding access points, and other information he wanted before embarking on this trip, he soon found that there was virtually NO information recorded for canoe routes in Canada.

John also discovered that there was no organization in Canada that was encouraging or promoting an appreciation of the great outdoor through canoeing by information available to the general population. He realized that he could not be the only one seeking this information, and he and a friend and mentor, Ron Johnstone joined forces and by the fall of 1971 the Canadian Canoeing Association (renamed in 1975 to the Canadian Recreational Canoeing Association) was formed. At the time, Ron was the President of the Canadian Camping Association, a resource of provincial organizations and people with kindred interests in canoeing.

By early 1973, we had our first National Board of Directors, with representatives from British Columbia, Ontario and New Brunswick. More provinces were added as appropriate people and organizations became known to the Board. Ron and John travelled to every province and territory and met with government departments, NGO’s and interested people to ensure representative recreational canoeing interests were identified. Eventually, 12 federated provincial and territorial organizations became the core of CRCA.

Those early years saw quick growth, our mission and objectives expanded to include establish canoe safety standards, to establish and monitor a set of national standards for recreational canoeing skills, instruction and evaluation, map and code standardization, canoe route documentation. CRCA acted as a liaison with other national groups with common interest; essentially to manage the development of recreational canoeing in Canada.

In 2006, our name was changed to Paddle Canada to reflect that we have added kayaking and stand up paddling, essentially encompassing ALL disciplines of recreational paddling. While our mission has evolved, and slightly changed over the years, the heart of our original message still rings true.