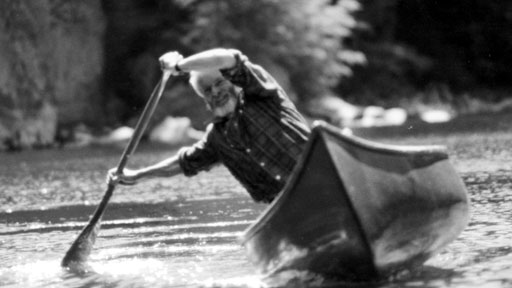 Established by Paddle Canada in 1990, with the permission and input of the Mason Family, the scholarship is intended to incorporate some of the characteristics that made Bill Mason unique and to help ensure that the memory, spirit, and ideals that he represented are kept fresh in the minds of Canadians.

Paddle Canada is proud to award this annual scholarship of $2000 to assist with the education of tomorrow’s environmental stewards – those people who help make a difference in the kind of world we live in today and pass on to future generations.

Few people have had the influence that Bill had in shaping the Canadian identity. His films, produced at the National Film Board, have been “mainstays in Canadian schools for the last 40 years,” says his friend, cameraman, and biographer Ken Buck.

Born in Winnipeg in 1929, Bill Mason showed an early interest in both art and canoeing. As a youth, he was a Manitoba Pioneer Camp guide and instructor. After he graduated from the Manitoba School of Art with a Diploma in Commercial Art, he worked as a commercial artist in Winnipeg, taking the summers off to go canoeing. Bill’s strong Christian beliefs helped develop his views on environmental responsibility.

Later, as a film animator with Crawley Films in Chelsea, Quebec, and then as a filmmaker with the National Film Board of Canada (1962-1984), Bill was able to combine his skills in art, photography, and animation to write, produce, direct, and act in his own films.

Bill married Joyce Ferguson in 1959. “She was his touchstone with reality, tempering his manic work ethic,” according to Ken Buck. Their children, Paul and Becky are themselves accomplished artists and internationally recognized canoeists.

To be eligible for the Bill Mason Memorial Scholarship, applicants must be:

We are pleased to offer an online application process this year. Please ensure you have all the required documents ready to upload.

Helpful Hints for Completing your Application

If you need help, do not be afraid to ask. Feel free to contact Paddle Canada if you have any questions or concerns. A university counselor, college advisor, your parents, or even another student may also be of service.

Be sure to follow the instructions carefully. Make certain to complete all sections, as incomplete sections will be awarded a value of zero.

Proofread, proofread, and proofread again! Misspelling and grammar errors may reflect poorly on your application. Have a friend or relative double-check your work.

Make certain your application is received on time. The deadline for applications is midnight 30-September of the current academic year. Incomplete or late packets will be rejected unless Paddle Canada is given prior notification.

Write a letter of thanks if you receive an award. Other than being the polite thing to do, if you are planning to apply for scholarships again in the future, a thank you letter for past scholarships goes a long way in impressing the scholarship committee.

On behalf of the Scholarship Committee, Paddle Canada would also like to extend our sincerest thanks to the many individuals whose generous donations have contributed to the stewardship dream of Bill Mason.

Past Recipients of the Bill Mason Memorial Scholarship Fund