Learn More
Call us “Icebreakers”, but it’s already April and we’re itching to get the canoe out! While many of our fellow “icebreakers” opt for a day trip, we were seeking an extended outing. As many of you already know, Ontario parks has delayed the opening dates of several interior parks until May 8th. Not a problem for us, as there are plenty of great routes outside of Ontario’s operating parks! Normally, we venture further north to explore the southern fringes of the Shield, but these areas are still locked away in winters’ frosty grip. As the majority of the province remains covered in a thick blanket of snow and ice, we turned our attention to the Southwest. Thankfully this region has thawed and the rivers are finally flowing unobstructed!

After pouring over the maps, I noticed a section of river bordered by parkland, heavily forested and mainly devoid of human settlement. In addition, the river cut a swath through a rocky gorge and side trails led to a few impressive waterfalls, rarities for this part of the province where many rivers cut through rolling farmland or built up urban centers. Our river of choice? Southwestern Ontario’s Ausable River!

Flowing 240km from Staffa to Lake Huron, the Ausable winds its way through some of the provinces most fertile lands. The river has a long history of agricultural use, so much so that in 1875, engineers diverted it’s outlet through a drainage project they called, “The Cut”. The project enabled farmers to drain the regions many lakes and wetlands to increase the size of their farms. The old river channel is now a pond like ecosystem contained within the Pinery Provincial Park, a great destination to paddle, but more on that another day!

Our journey would see us paddle through an unaltered swath of river upstream of “The Cut”. Free of dams and spanned by only by a handful of bridges, our route would take us through one of the most scenic river landscapes left in this part of the province.

While not in a full flooding torrent, the river was wide and fast, and the icy waters of spring runoff demands extra safety precautions. Donning a healthy layer of neoprene and wave breakers, we began our journey from the old bridge at Keyser, paddling past rolling banks and expansive farm lands. After a few kilometers, the rural surroundings gave way to stunning forested shorelines. We were greeted by countless deer, a curious beaver and even a bald eagle! The topographic map indicated 37 sets of rapids along this stretch, and while the flow was quick, we had yet to paddle through any major whitewater. That all began to change as we approached Hungry Hollow and the mighty Arkona Gorge! 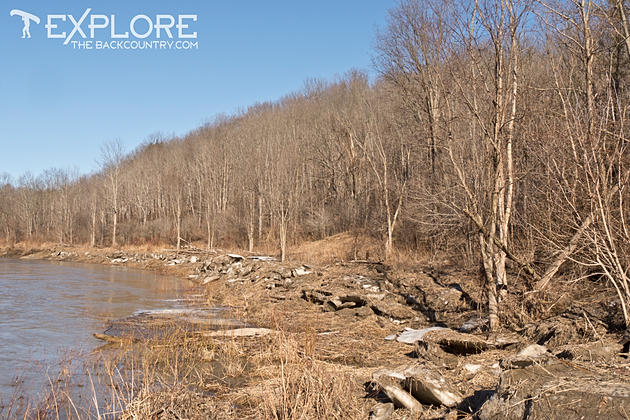 Ice still clings to the banks

As we neared Hungry Hollow, the river began to change character. In the kilometers leading up, the rapids had become more and more numerous until they blended together in a lengthy chain of endless whitewater! Sandy banks gave way to blocks of sedimentary bedrock and forested cliffs would soon surround us as we entered the Arkona Gorge. Constricting through the gorge, the speed of the water quickly picked up and we began to paddle through the best whitewater of the trip! Thisthrilling section was full of non-technical CII fun! While the river was free of major obstructions, we had to keep diligent, as some sections whipped up short but powerful sections of CIII rapids. Some standing waves approached 4ft in height! Wisely, we avoided the rougher waters, as playboating in large waves with a boat laden with camping equipment is not a good idea!

After the whitewater subsided, we found ourselves at Rock Glen Conservation Area. Beaching the canoe, we hiked to the top of the gorge to visit one of the only true waterfalls in the region; Rock Glen Falls. Plunging 10m over the gorge, the waterfall has carved a path nearly 300m from the Ausable River, leaving behind exposed beds of fossils dating back to 350 million years. 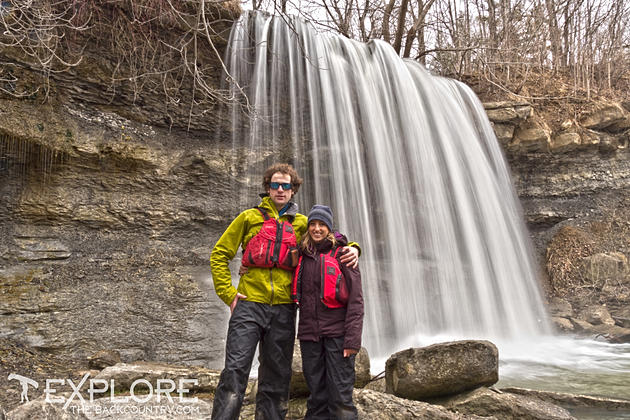 After taking pictures and exploring some of the hiking trails, we clambered back down the gorge to our canoe. With the day wearing on, and the temperature steadily plummeting, we set off to find our campsite for the evening.

If you plan on spending more than a day on the Ausable, you have 2 camping options to choose from. The first is Rock Glen Family Resort, located adjacent to the conservation area. For those wishing to continue to either Port Franks or Grand bend, camping can be found at the Pinery Provincial Park. A short portage around the Burley Bridge will bring you to the Old Ausable channel within the park. Excellent waterside campsites are available at the Riverside campground, just make sure to book your site early as the park can quickly fill up! As we weren’t paddling as far as Port Franks, and Rock Glen was only a short 10km paddle from our launch, we resorted to option 3; stealth camping. 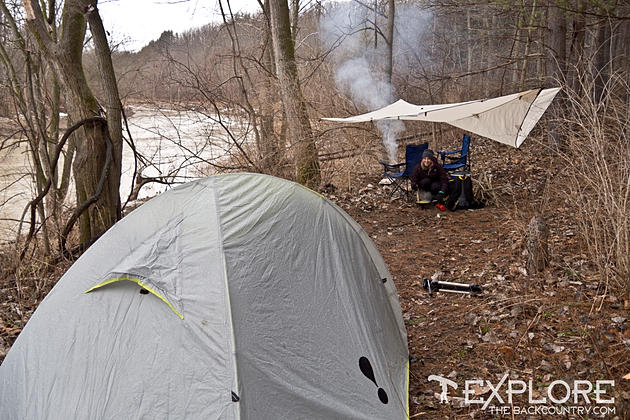 Our campsite, high on the banks of the Ausable River

So what exactly is stealth camping? By definition, stealth camping is the act of secretly camping in a public or private area and then leaving without being detected. Paddlers on long distance trips often resort to a few nights spent stealth camping, as public or park land can be more than a day’s paddle away. Now I’m not saying go out and stealth camp where ever you please, but use it as a last ditch effort if no suitable options are present and remember, leave no trace. No one should ever know you spent the night there if done properly. This form of camping takes leave no trace to an entire new level! Luckily for us, the forested banks of the Ausable provided ample opportunity to stealthily setup our camp for the night. Ensuring we were on conservation property, we found a secluded spot high above the river bank nestled amongst a grove of red pine. Packing a portable fire pan and setting up the tent on a level abutment, we ensured our presence had as minimal a disturbance as possible.

We setup camp just in time, as heavy raindrops began to fall from the sky. Warm and dry under a tarp, we enjoyed a fantastic dinner of grilled salmon, vegetables, potato salad and beer. The rains soon brought a chill and we retired to the tent, drifting off to the sound of drops splashing against the fly. After a chilly night, we awoke to a brisk but cloudless morning and quickly set off downriver, basking in the glow of the rising sun. As we drifted down the Ausable, we soaked up the moment and reflected on what a perfect “icebreaker” paddle the trip had been. Running whitewater, exploring waterfalls and camping along the riverbank under towering pines was a great way to start the season off!