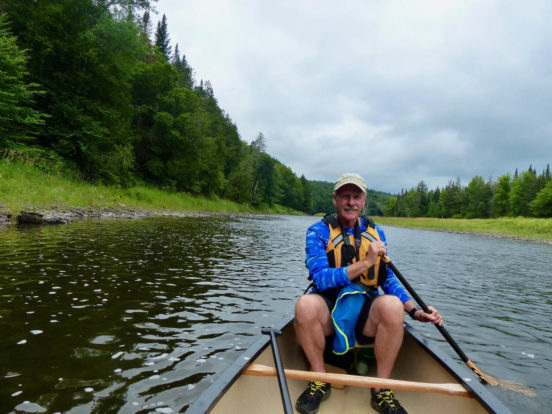 In 1974, Richard attended the Atlantic Canoe School directed by Sue Cousineau. Later that year John Eberhard and Ron Johnstone visited him at Riverside school where he was a teacher. He was invited to become the CRCA board representative for New Brunswick and to work with Bill Palmer in formalizing a provincial recreational canoeing association organization. Later that year, he was one of the founding members of Canoe New Brunswick (now Canoe Kayak NB). Richard was also a founding member of the Meduxnekeag Canoe Club in his hometown of Woodstock and served as President and Technical Chairman for many years.

Richard was one of the first representatives on the board of the CRCA. He served in a variety of roles between 1974 through the early 1990s. He was chairman of the Leadership Development Task Force (Technical Director) for 4 years. This was at a time when the white water programs were being finalized and the sea kayak programs were being developed.  To that end, he took the coastal paddling course to Cape Enrage. He conducted one of the early moving water courses on the St Croix. During that time CRCA was finalizing the skills and Instructor programs for Flat Water, Canoe Camping, and Moving Water. He was also a member of the Standards Committee, dedicated to finding a positive response to the Lake Temiskaming canoe tripping tragedy which took 13 lives. Richard attended the London CRCA offices on several occasions to work on the Canoe Camping task force to develop a set of Guidelines for Group Tripping.

In the late 80’s early 90’s, he was a member of the technical committee working on “White Water” certifications. In 1990 CRCA adopted the developing of the Coastal Paddling Certification initiative. This became a 10-day program hosted by the BC Recreational Canoeing Association on Vancouver Island. CRCA Wally Pridolens was the coordinator. In 1991/92 Richard ran Coastal Paddling courses in NB and in ’92 co-instructed the National white water courses in NB.

In 1991 Richard formed Baymount Outdoor Adventures, a successful commercial outfitting and guiding company that continues to provide safe adventures to thousands of canoeists and kayakers.

Richard, together with his wife Kathy, continues to be an inspiration and guide to many who enjoy canoeing and kayaking as leisure time pursuits.