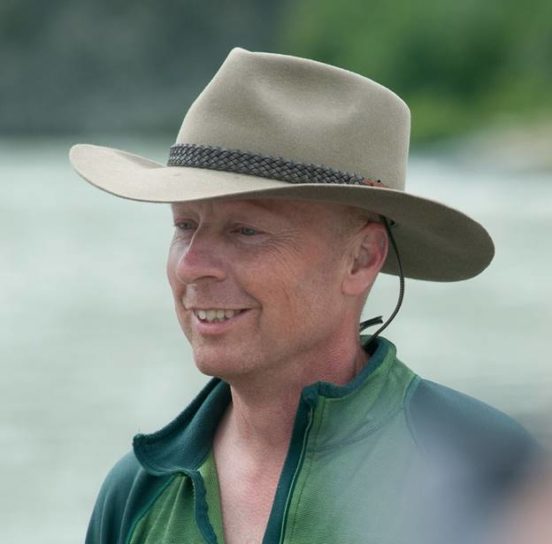 Neil was an active CRCA instructor when he was building his company (Nahanni River Adventures). Canoeing was at the heart of the company and to provide an alternative to rafts on the “River of Gold`. He developed the 28′ Voyageur canoes that could be disassembled into 8 pieces and transported in a Twin Otter aircraft to remote rivers. The Nahanni remained the realm of tandem canoes and expedition rafts. Neil was the Paddle Canada Alberta Director during the mid-’80s.

From Dry Bay on the Alaskan coast to Fort Simpson in the Canadian interior, Hartling has made himself something of a local legend – an author, explorer, outfitter, and canoe manufacturer who’s a prime mover and shaker in the hot new industry of ecotourism. Hartling moved his home and business north to Whitehorse in 1992, closer to the rivers where he runs his summer trips. But he also moved to be a more permanent fixture in the Northern community – preservationist, spokesperson, promoter.

A success story for the business was in Jasper called Rocky Mountain Voyageurs. The company fostered recreational paddling by taking more than 5,000 visitors a year down the Athabasca River in the Canot du Nord.

Neil`s accomplishments were greater than a commercial interest. He has been a significant influence on safety, land conservation, and environmental issues. “The CRCA provided the bedrock of his staff canoe skills over the decades“. His company regularly ran expeditions on more than 20 world-class northern rivers. There were many incredible experiences over the years, and among the more profound, was the role we were able to play in large conservation efforts. These included creations of Tatshenshini Provincial Park in BC which completed a foursome of protected areas, comprising the largest bio preserve in the world. Another was expanding the boundary of Nahanni National Park to include the entire watershed, making it one of the largest National Parks in the world. And recently, protecting the Yukon’s Seven Sacred Rivers of the Peel Watershed, an area nearly the size of Scotland. He expertly paddled through the political and legal system for a decade, all the way to the Supreme Court of Canada.

Over the years Neil shared canoes with the rich and famous and leaders of state but agrees that the most meaningful connections were with Canadians who were making a lifetime pilgrimage to canoe our famous rivers.

Perhaps one of the indications of the effect he had on the lives of participants were requests that came from families of past deceased guests, who wanted him to spread their ashes on one of the rivers because it had been “the greatest experience of their lives”.

Neil reports that Paddle Canada provided the latest skills that both guides and guests used to enjoy the trip-of-a-lifetime. He has recently participated in a Paddle Canada Instructors course and was proud of the robust development of every facet of the program. “It is a testimony to the commitment of staff, volunteers, and the vision of Canadian canoeists over the decades”.

Neil Hartling remains a committed proponent of northern tourism. He believes it not only brings economic and social benefits to native communities but encourages an ever-growing constituency of eco-advocates in the populous south.

Neil sold his company in 2019. Now, as Chair of the Tourism Industry Association of the Yukon he has been working full time wearing his volunteer hat, helping colleagues including canoe schools and canoe outfitters to survive during the Covid 19 shutdowns.