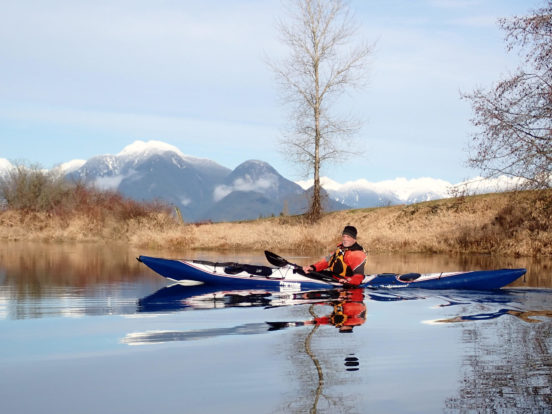 Mike Gilbert first joined the Board of Paddle Canada in April 2012 as the BC Regional Representative. Pumped to have been elected and able to serve our British Columbia members. He served two full terms (6 years) in that position. In 2014 he was voted by the Board into the position of President and held the position until 2018, at which point he stepped down to allow for a new President, with fresh ideas.

During Mike’s time as President, fortunately, there was really no crisis to ever have to deal with and, with a large $2.1 million grant provided by the federal government that went on for three of those years, things went very smoothly from our day to day and year to year operations.  He expresses a deep thank you to Dawn Callan and Graham Ketcheson for all their work that went into this.

What this did allow was for more focus on marketing Paddle Canada nationally – getting our name out there; what we do; and the programs we provide.  It was a huge success not only for increasing Paddle Canada’s visibility across Canada nationally as the leader for instructional programs in recreational paddle sports but for Canada’s on-water enthusiasts by way of providing more tangible information on skills, training, and safety.  Ad campaigns, booths at Regional Boating or Outdoor shows in major cities, and member presentations to the public, in general, all added up to positive public communication.

This was also a time when PaddleSmart (developed by Paddle Canada instructional members and the marine component to the AdventureSmart Program) came to see its highest use as an on-land safety presentation given to members of our paddling community, Cadets, Scouts, Guides, and in school classrooms across Canada.  If Mike could name just two people who were instrumental in developing this brilliant program it would be Blair Doyle and Priscilla Haskin – both Past Presidents of Paddle Canada.

This period was also a huge time for enabling and establishing strong partnerships within government offices (Safety Canada, Safe Boating Council), national associations, and like-minded organizations nationally and regionally.  The importance of partnerships and sponsors cannot be understated.  These are things that need to be both nurtured and expanded as we move ahead.

Another big focus that came about during this period was youth.  Although our under 18 crowd had always had a presence through school participation, Scouting / Guiding, and Cadets, the Board provided more support to reinforce the continuing introduction of children to safe paddling.  One of the big accomplishments to come out of this was the creation of the Waterfront Instructor Program that could now be accessed by the staff of hundreds of camps across Canada so they were better prepared to manage risk, provide safety knowledge, and better instruct on-water skills for canoe, kayak and stand up paddleboards.

Lastly, this was a time when we looked at creating a National Camping program which was successfully accomplished under the leadership of David Johnston.  This program gives our Instructors another completely separate program to provide to the public and, as a land-based program, it can go year-round in all areas of our country (winter camping anyone?).

In April 2021, after his 3-year term was completed, Jeff Martin decided to step down as President.  Mike was both humbled and honoured when the Board approached me to return to take on the role of President once again.

“I would like to take the time to thank all those who volunteer their time and intelligence to ensure Paddle Canada remains viable and valuable to recreational paddlers – not only in Canada but worldwide now. To all of the Board members, thank you.

For the volunteers of all our different committees that do the majority of the work, thank you.

To all our members…you are the backbone of Paddle Canada and the reason why we continue on such a successful path as we evolve and deliver the on-water safety and skill programs Canadian paddlers want and need.  Thank you for your continuing support, continuing work, and continuing positive and professional image presented to the public each and every day.  Without you we are nothing…with you we are everything.  Thank you.” ~Mike Gilbert