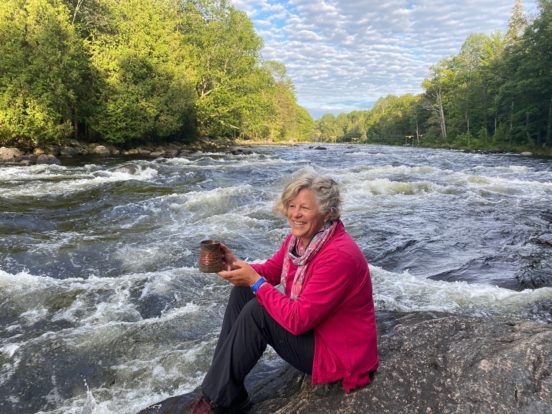 Claudia is perhaps one of the most influential women in paddling in Canada. She has inspired thousands of people to either try whitewater canoeing, kayaking and rafting or to train and polish their paddling skills.  Officially this has been done through courses and paddling at her family-owned business (also celebrating 50 years!) Madawaska Kanu Centre (MKC) and OWL Rafting on the Ottawa River.

Claudia has also served on countless committees that range from elevating instructor levels within Paddle Canada to being the voice of Canoe Slalom at three Olympic Games (1996, Atlanta, 2004 Athens, 2008 Bejing) to being a paddling ambassador by creating Canadian Canoe Route passport that connects Toronto to Peterborough to Ottawa to Kingston.

Claudia has many achievements on and off the water.  As an athlete, Claudia Kerckhoff-Van Wijk pushed back barriers, both physical and mental, and helped to define excellence in sport and roles for women.  Confronting the challenge of being female in a risky, relatively unknown, male-dominated activity, Claudia was the Canadian women’s whitewater kayaking champion from 1974 to 1985, Gold Medalist at the 1976 Pan Americans, and the Bronze Medallist at the 1982 World Championships.  Claudia was instrumental in bringing Canoe Slalom into the Pan Am Games, and bringing them to Minden in 2015.

Receiving the 2017 Lifetime Achievement World Paddle Award for her commitment and contribution to the paddlesports industry, both in Canada and worldwide is commendable.

Claudia brings her combination of athletic talent and courage, and her desire, dedication, and enthusiasm to all of her pursuits and challenges.  She is indeed a very worthy recipient of the 50 years 50 people Recognition Award.

A founding Committee member of the River Kayak PDC, she served on it for over two decades.  She was one of the builders of our River Kayaking program and in 2009 was instrumental in partnering Paddle Canada with Canoe Kayak Canada, at the National level. Many benefits to be working together have proven themselves.

When asked what her biggest achievement in paddling was, she says

“I feel my biggest achievement is inspiring thousands to give whitewater canoeing and kayaking a try, through Madawaska Kanu Centre and OWL Rafting on the Ottawa River.”